Making Offices More Beautiful, One Slice at a Time

AFP is a supplier or high-end veneers, but in recent years, it has added some light assembly for its customers. So instead of simply making the beautiful wood veneers, it is also making desktops for some, case goods for others- all expertly covered in the company's signature veneer products.

When you are a small office furniture supplier working in rural Wisconsin, you have to hustle harder. You have to do more for your industry that buys you and your employees your dinnfer and helps you make your car payments. That is just what Architectural Forest Products has done over the past few years.

Instead of being a supplier that simply, well, supplies, AFP is working on being a key partner to its customers, which include some of the top office furniture makers in the industry. AFP is a supplier of high-end veneers, but in recent years, it has added some light assembly for its customers. So instead of simply making the beautiful wood veneers, it is also making desktops for some, case goods for others- all expertly covered in the company's signature veneer products. The components- some finished, some unfinished, depending on AFP's customers preference- arrive at customers' plants ready to be finished or added to the final furniture products. AFP is a good example of how the office furniture industry is evolving. Suppliers are taking a larger role in the creation of office furniture products. Innovation, once expected exclusively from manufacturers, is rising from the supply chain as well.

The added business is welcome, says AFP President Jason Krings, whose father, Ken Krings founded the comapny in 1985. He says the company is prepared to take on any challenege from a customer at its 51,000-square-foot plant in Two Rivers, Wisconsin, about half-way between Milwaukee and Green Bay. The company's employees know how to work with wood, including some of the most exotic and expensive species found on Earth, so building case goods and tabletops is no problem.

"Our company is open to doing a lot more," Krings says. "We are expanding our capabilties and the number of products we can do. Rather than having projects served up to us on a platter, we find that we are getting involved in a lot more of the details than we have in the past - more value added."

The company always has been good at what it does. Its work can be found in Tiffany's flagship store in New York, lining the elevator cars at the Trump Hotel in Chicago and as wainscoting at the Pentagon in Washington, D.C. To free itself from the feast or famine high-end, luxury veneer jobs, AFP branched out into office furniture work a few years back. More recently, it has pushed to add more value for those office furniture makers.

To that end, KI acquired 50 percent of AFP a few years back after its veneer supplier in Montreal retired and closed his plant. AFP is much closer to Green Bay, and it gives KI a high-end veneer maker that can reliably supply the furniture maker with veneer components and add veneer to its movable wall product line. Still, KI is just one of AFP's office furniture customers. AFP runs independentely, and its customers include many of the top manufacturers in the industry. And that customer list is growing along with AFP's capabilities.

That doesn't mean AFP has turned away high-end work. It's simply added other jobs to supplement it. On a recent visit, the company was running a wood ceiling design for UCLA. That's good news for the office market, which gains incredible expertise from AFP's entry into the sector. It is good new for KI as well, which owns half the business. KI brought its Montreal business back in state, which boosted AFP and helped KI develop a closer and better supplier in the process.

One might think there is little innovation in veneering. After all, it is a wood product. What can possibly be done that is new or innovative?

All it takes is a few minutes with Krings to understand how his portion of the industry is changing. Veneer can be used to wrap aluminum extrusions. New veneers being made from scrap wood are nearly indistinguishable from rare (and environmentally protected) hardwoods. It is Krings' job to keep up on all the changes in the industry.

He also must track the ever-changing appetite for wood products in general. Though there is always a segment of the population that loves wood products, if it something that flows in and out of fashion. Current trends toward more "homey" offices and warmer surfaces have wood coming back strongly. The younger generations seem especially attracted to wood, too, which bodes well for AFP and other wood manufacturers.

Following the trends for wood demand isn't enough. Krings also must keep up with the taste in wood species, colors and shades. That taste for wood ranges from dark to light, depending on the time and even the region. There has beena  recent shift toward walnut, he says. Krings recently purchased a large amount of reclaimed hemlock that came from the subfloor of an old manufacturing plant that he is turning into a veneer- with nail holes and all. It gives him a product that looks distressed- another trend in wood furniture.

Krings also must follow the fate of the handful of mills and veneer slicers, which are shutting down at an alarming rate and could affect veneer supplies if the slide continues.

AFP has started working on laminates, which Krings admits to looking down his nose at prior to the revolutionary change in quality in some laminate materials. "Laminates are so good today," he says. "We are definitely seeing more of that and even alternative laminates that look like stone or metal, so that is exciting."

Krings still gets excited when he sees AFP's veneers used on a beautiful project, whether it is at the U.S. Naval Academy, Bellagio Hotel & Casino, Johns Hopkins University, Wharton School of Business or closer to home in the luxury boxes at Lambeau Field. "There is no school for this," Krings says, the hiss of the steam that keeps the dust down and the moisture up a constant in the background. "You need to be able to put yourself inside the room (where the veneer products are going). it is that kind of skill that the customer appreciates."

Orginally published in Business of Furniture on October 19, 2016.

AFP In The News 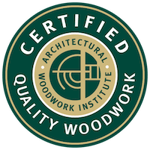